How Little Problems Become Big Problems At Scale In A SaaS 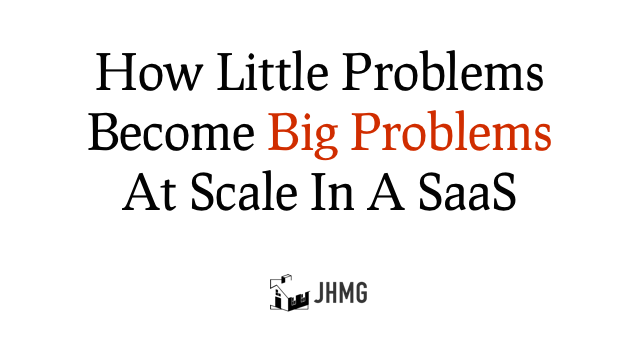 There are few workplaces more hectic than a restaurant. And mistakes happen, of course. For instance, say an order for a pizza asked for three toppings and, for whatever reason, you only got two.

Well, it’s an irritation, but easily fixed. Make another! Apologize for the error, maybe give a small freebie.

What if it’s not just one customer?

Now, imagine this sort of thing happening on a large catering order. Thirty pizzas, all incorrect. And because it’s a catering order, they all had to be made close to the time they were supposed to be going out to the event. Now you’re going to be late, the customer is going to be unhappy because now their time-table is off, and your other customers are going to be delayed because you’re having to pull manpower and pizza oven space to rectify the problem.

It’s a small mistake, but little issues can become big ones in the right circumstances.

Little problems happen. They just do. And sometimes they sneak by you.

Sometimes they don’t even sneak. When you’re running a team and trying to grind through development, your priorities can shift at the drop of a hat. Even if you track all of your problems, some small issue might be continually pushed down the priority list until it decides to demand your attention.

This usually happens when a small issue appears and looks like an easy, but time-consuming, fix. So it’s flagged for later. Later just doesn’t roll around until the system has grown three, four, ten times as big as it was when the issue first appeared.

And it’s going to take a lot more time to fix because it has scaled with the system.

Thirty Pizzas Is Nothing

Compared to how problems can scale in SaaS, a botched catering order is just a minor irritation. Because sometimes the little problem is something that isn’t noticed in a patch or update. Smaller systems with just five or fifty users won’t be impacted quite so heavily. But for a successful SaaS system, this can mean that suddenly thousands of users are all having problems and upset – all at once!

So in SaaS, you have to double- and triple-check everything. This can mean pushing things out to members of the team outside of development – UX, Marketing, Sales… The more people who take a look at things before you push it live, the more likely these little problems can be caught while they’re still little.

And even if you want to move on to bigger, faster things during development, make certain that the little things, especially the annoying ones, get fixed. You don’t want them getting bigger.

Take a look at some of our top read articles on SaaS development here: