Every SaaS In The World Does These Things 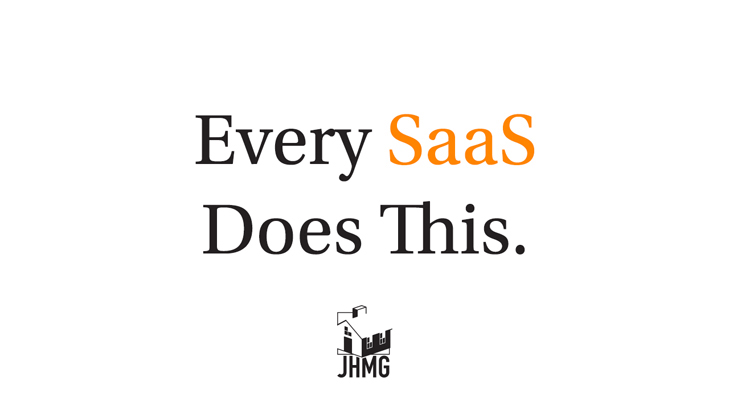 SaaS systems are clever and diverse, solving a huge variety of problems in the world. There is overlap, of course – there are systems that compete with one another, directly or indirectly. And there are some that stand, basically, alone.

There are thousands of different SaaS systems on the market, and we’ve taken the time to prepare a list that covers all of them.

EVERY SaaS system in the world does one of these things:

What? You expected a longer list? There’s no need. There is no third option. Literally every SaaS system out there does one or both of these things.

Let’s Take a Look At Some Examples

One of my favorite SaaS systems is this gorgeous little number called Medrev. It’s a HIPAA-compliant satisfaction survey and reputation management tool which was designed and intended for healthcare practices, clinics, and hospital settings.

Yes. My team built it.

When you look closely at what Medrev actually does, you find that it helps healthcare providers to gather actionable information from feedback surveys and from online reviews.

All of this could be done manually. You could have every member of staff, from doctors to reception, ask patients about their experience, the cleanliness, the doctor’s bedside manner – all of it. Then tally that information, enter it into an Excel file, and analyze it.

And you could go online and manually scrape all of the reviews that are posted there. Everything from Facebook and Google and ZocDoc and the dozens upon dozens of other sites.

Which would take hundreds of man-hours. Whereas Medrev automates the whole process in a way that makes it less intrusive than the doctor probing you during your check-up. Doctors have enough on their plates, anyhow. Clearly, Medrev fills an efficiency gap by making all of this information more readily available. And while the information is there, the general inaccessibility of it without a system in place to help gather it means that Medrev effectively fills the knowledge gap, as well.

The Efficiency Gap Is A Big Deal

If you think about Asana or Facebook, they also work to fill an efficiency gap. Facebook’s focus is more on filling efficiency in people’s private lives (keeping up/communicating/arguing with friends and family) while Asana is more business-oriented, but the gap filled is practically the same.

In fact, the entire reason that Facebook has become a multi-billion-dollar company is because of their success with filling that efficiency gap in a convenient (and slightly addictive) manner at massive scale.

Zoom and Skype, two of the top video-calling services out there, do similar things. Once again, there is a difference in audience, where Zoom caters more to businesses and Skype is more well-known due to its longevity. Zoom plays heavily to the efficiency gap for businesses by making it easy to set meetings and reminders, and have these placed on calendars. Then, there’s the fact that business meetings can be conducted essentially face-to-face without needing to pay for expensive plane tickets. Business calls can now include visuals thanks to screen-sharing – which also fills the knowledge gap, just as being able to see the faces of those you’re speaking with can provide additional insight.

When it comes to video calling services, take a look at one of my favorite new entrants into the video calling market, RemoteHQ. These guys are doing it right, and in a few more months, I think they’re going to start being a threat to Zoom.

When you’re trying to negotiate a sale, you’re more likely to succeed – and with favorable terms – with every bit of information you’re able to glean. This is where video calls can become especially valuable for sales teams. Seeing that the company’s CTO looks bored can give you an important indicator that you need to move on or shift topics slightly. Raised eyebrows are akin to a nibble at the hook. Body language can be crucial, and that insight is missing on a standard phone call.

Brainleaf, another of our SaaS systems, approaches this knowledge gap in a different way – by providing a set of pre-built templates to ensure that our users have access to a list of items to make certain are not overlooked when scoping out various projects. This is important because, when it comes to scoping (planning out the features and systems that go into website and application projects), the most daunting aspect for a lot of users is, “where do I start? what if I’m forgetting something important?”

Because, while Brainleaf’s driving function is to fill an efficiency gap by providing an effective tool with which to combat scope creep, it can be rendered impotent by a lack of knowledge or experience by its users. So filling that knowledge gap becomes crucial to the system’s viability. And Brainleaf isn’t alone in that regard.

Verloop – the chatbot we use on BrainLeaf, as an example, has a lot of tools to help improve the efficiency of their chatbot. But if you don’t know that the tools exist or understand how they work, then they do you no good, and Verloop’s success in filling your efficiency gap becomes hindered.

One Or The Other, But Often Both

Every SaaS system in the world finds its purpose in filling one of these crucial gaps. That’s where it finds its value and makes an argument for its own existence.

Or both. Even if the focus is only on one, sometimes filling the other, to some extent, becomes a necessity.

SaaS systems that don’t do at least one of these things won’t be successful. If your sales pitch can’t address one of these directly, you’ll never get it off of the ground. Because that’s what a SaaS does, and it’s very unlikely that anybody will pay for a SaaS that doesn’t do one of these things.

Jason Long is the founder and CEO Of JH Media Group as well as a number of other businesses. He is always interested in new businesses, new ideas, and new ways to change the world. He has over 18 years of experience in design and development, he has served in a variety of different roles ranging from designer to CEO. Most of his time is spent working on the build and development of new ventures while traveling the world.