A SaaS Business Is A Sales & Marketing Business 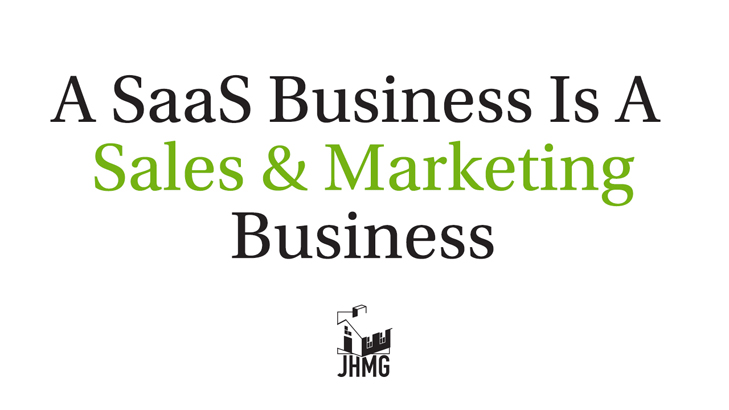 A lot of people and companies who want to get involved in SaaS development are operating under a faulty premise: that SaaS is this sort of magical passive income source and that they can just build the product and start making money. The confusion is that people thing they’re building a software system when really they should be focused on building a SaaS sales and marketing machine.

But very few businesses, even established ones, can just build a system, release it, and have the whole thing just work like that. The only ones who can, potentially, are those who already have a big audience from previous ventures.

Get help with customer acquisition and activation!

If you don’t like marketing, don’t build a SaaS.

If you don’t like sales, don’t build a SaaS.

Long before the system is ever finished building your SaaS, you’re going to have to be marketing, selling, and generating buzz so that when you’re ready to release the system to your greater audience, you have buyers lined up and ready.

Building a SaaS costs, on the low end, tens of thousands of dollars. And once it’s done and throughout the build process, you don’t want any delay in trying to bring in money to keep paying your bills and, more importantly, your team. The build that you launch the system with will need to be updated. Features will need to be added. All of that costs money, lots of money.

Chefs don’t cook food, then sit on their hands for a few days before selling it. You have to push it while it’s hot.

You have to get started running with your marketing and sales marketing hat on long before you launch. If sales and marketing aren’t your cup of tea, you should reconsider getting involved with such a sales-intensive project.

Get a free consultation on pre-selling your SaaS business.

Of Course, It Doesn’t All HAVE to Be On You…

…If you can manage to find some good marketing and salespeople to bring into the team. That, of course, will impact how much money you make from the system, and it raises the bar for the point at which the system can be considered “successful.”

But that might be the best course to give it a chance at success. Simply put, there is too much marketing work to be done by somebody who doesn’t like it or doesn’t feel that they’re good at it, especially if that person is also trying to manage the rest of the project, as well.

If you decide to hire a dedicated marketer, sales group, or team, make certain that they’re familiar with all the major sales & marketing strategies used in SaaS. That’s only the tip of the iceberg, but those are among the more crucial marketing types for SaaS projects.

And SaaS businesses are at least as much about marketing and sales as they are about tech or software.

What do you think?

Let me know in the comments what you think about all of this, or send me a video response to this video on our Youtube channel!

Jason Long is the founder and CEO of JH Media Group as well as a number of other businesses. He is always interested in new businesses, new ideas, and new ways to change the world. He has over 18 years of experience in design and development, he has served in a variety of different roles ranging from designer to CEO. Most of his time is spent working on the build and development of new ventures while traveling the world.