Giving a Voice to the Voiceless 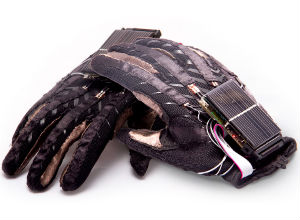 There are 15 flex sensors in the gloves that detect the finger bends and the motion through space. Through Bluetooth, they are then sent to a mobile device that translates them into language when the motion is recognized. Using Microsoft APIs for Speech and Bing, the text is spoken by the phone using Windows 7. They are working with other developers and soon it will be supported by Android and Apple iOS. The base cost for each glove is $150 dollars but they predict this number will drop by 50% once everything is developed, tested, and marketed. 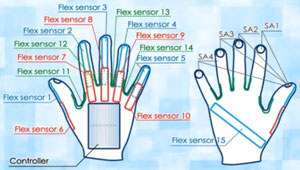 If you have a deaf friend or relative, you may understand the feeling they have being barricaded from the rest of the world. Personally, I have seen this firsthand having a deaf relative. People seem to ignore the deaf and do not consider them members of society. You may think that using your hands to speak is weird. With texts, emails, and social media we have revolutionized the way we communicate so anything is possible! We are interested in seeing where this goes and this invention gives a new meaning to breaking the language barrier.